WWE owner, Vince McMahon. The WWE is being sued by over 50 former wrestlers. photo: wwe.com

Earlier in the summer, you may have heard about the WWE concussion lawsuit. The suit involves over 50 former wrestlers who are suing the WWE over CTE-related brain injuries.

The class action lawsuit is being lead by six attorneys, including Konstantine Kyros who practices in the greater Boston area.

Essentially, the plaintiffs are arguing that the WWE never made the negative long term effects of professional wrestling clear. They claim that the WWE put financial gain ahead of the health of its talent by concealing the dangers of repeated head trauma. 90s wrestling star, Ahmed Johnson. Ahmed is one of over 50 former wrestlers involved in the WWE concussion lawsuit. photo: wwe.com

The suit notes: “The WWE knows that its wrestlers including the plaintiffs are at great risk for these diseases such as CTE that can result in suicide, drug abuse and violent behavior that pose a danger to not only the athletes themselves but their families and community, yet the WWE does nothing to warn, educate or provide treatment to them…” Interestingly, WWE wrestlers are required to carry medical insurance on their own. Given the WWE is a billion dollar company, the debate over “independent contractor status” versus “employee status” is often looked at as a loophole for a large company to save money at the expense of their employees… er, I mean “independent contractors”.

Which wrestlers are suing in the WWE Concussion Lawsuit? Wrestlers Ax and Smash, collectively known as Demolition. They were a popular duo in the 80s. Ax and Smash are two of over 50 wrestlers suing in the WWE concussion lawsuit. photo: wwe.com

Some of the names in the suit include Road Warrior Animal, King Kong Bundy, Jimmy “Superfly” Snuka, Chavo Guerrero Jr, Adam Bomb, Kamala, Sabu, Ax and Smash (Demolition), Ahmed Johnson, Slick, Earl and Dave Hebner, and dozens of others. You can find the entire list at the bottom of the page.

Something that might raise an eyebrow is that there are several wrestlers on the plaintiff list who spent a very limited amount of time with the WWE, and some who weren’t with the company at all. Because the WWE bought up several other promotions in later years is likely the reason we see some of the ECW, WCW, and territory guys on the list. Also of particular note, most of the wrestlers from the list were midcard guys, and a couple of them were not wrestlers at all, rather managers or referees who rarely took bumps. You can’t downplay the severity of CTE, but at the same time, you can’t help but wonder if some of these guys may simply be looking for an easy payday. Midcard guys in wrestling are generally paid a very small fraction of what the main eventers pull in.

CTE (chronic traumatic encephalopathy) is essentially a form of brain damage that is commonly linked to athletes in contact-sports who receive repeated blows to the head. A normal human brain compared to a brain suffering from advanced CTE. photo: Boston University Center for the Study of Traumatic Encephalopathy

Everyone remembers the horrific Chris Benoit story from 2007. Benoit’s brain was found to have severe CTE. Two years later, the same conclusion was reached for deceased WWE superstar, Test.

As ClassAction.com points out, this latest WWE concussion lawsuit is modeled after a headline-grabbing case that was made against the NFL. 20,000 retired NFL players were collectively awarded nearly a billion dollars after an April 2015 settlement was reached. The players had proven that the NFL knowingly hid information about the medical effects of head trauma from their players.

History of Lawsuits against the WWE

Even if the WWE concussion lawsuit makes it to court, battling the WWE will not be an easy fight. The company has had several similar lawsuits thrown out over the years, including that time Chris Kanyon, Raven, and Mike Sanders tried to sue them in 2008. 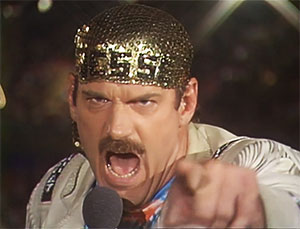 But not all lawsuits go in the WWE’s favor. In 1990, the company was sued by Jesse “The Body” Ventura. He received a cool $800,000, and according to Ventura, he still receives quarterly checks from Vince McMahon. In a November 2015 interview with WrestlingInc, Ventura notes:

“I had to pay for my own health insurance for me and my family. It was costing me $5000 a year. If we had a union, maybe that could be diminished to $2000 a year. There’s strength in numbers. You could have retirement. I took the gamble and sued Vince and beat him in 1990. He still sends me quarterly checks. Anything I appear on, he has to pay me for.”

The WWE comments about the concussion lawsuit:

WWE issued the following statement regarding the concussion lawsuit: Haku, one of over 50 former plaintiffs in the WWE concussion lawsuit. photo: wwe.com

“This is another ridiculous attempt by the same attorney who has previously filed class action lawsuits against WWE, both of which have been dismissed. A federal judge has already found that this lawyer made patently false allegations about WWE, and this is more of the same. We’re confident this lawsuit will suffer the same fate as his prior attempts and be dismissed.”

If you’re good at decoding legal language, you can read the formal suit here. We’ve listed the ring names of the plaintiffs below.

What are your thoughts on the WWE concussion lawsuit? Do you think it’s fair that the WWE hires wrestlers as independent contractors? Sound off in the comments section below.