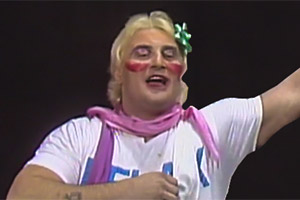 Adrian Adonis – Dead at 33 after the minivan he was traveling in crashes off a bridge, into a creek. photo: wwe.com

The life of a wrestler contains many potential dangers – the pitfalls of drugs and alcohol, the temptation of easy romance, and the dangers of the road.

Keith Franke, better known as Adrian Adonis found his way on the road to wrestling success, but a tragic road accident ended his career in an instant, leading fans to wonder how things might have otherwise turned out for the young star. 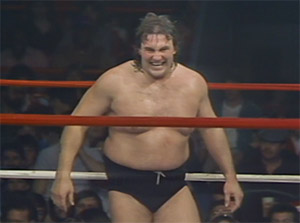 Franke debuted in 1974, and worked under his real name initially. By the early 80s, however, he was a leather-clad biker, working under the moniker Adrian Adonis. Adonis improved his skills, eventually landing in Verne Gagne’s American Wrestling Association.

Adonis enjoyed success as a singles star and tag team performer. He formed the legendary “East-West Connection” in the AWA with Jesse “The Body” Ventura, holding the AWA World Tag Team Championship.

Adonis and Ventura also worked in the World Wrestling Federation as a team and in singles competition. Adonis was a fantastic worker, with WWF champion Bob Backlund praising his ring skills in his memoir. 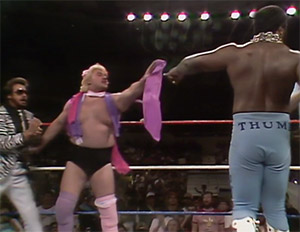 In 1986, the WWF had Adonis undergo a radical transformation, ditching his leather outfits and transforming into a flamboyant wrestler known as “Adorable” Adrian Adonis.

The character was played off stereotypes of gay men as much as the WWF could get away with during the kid-friendly days of Hulkamania (rumor has it Vince McMahon liked “Exotic” Adrian Street’s character, but felt Street was too old to work in the WWF).

Wearing pink clothing and made up in garish make-up, Adonis also puffed up to a reported 350 pounds. Adonis played the effeminate character well, quickly becoming a top heel. 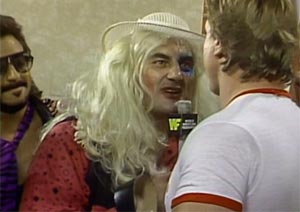 Despite his extra weight, Adonis was still agile in the ring, and at the top of his mat game.

With Roddy Piper gone, Adonis took over “Piper’s Pit,” renaming it the “Flower Shop”—that is, until Piper returned to reclaim it. This launched a heated feud culminating in a Hair vs. Hair Match at WrestleMania III that saw Piper triumphant.

Behind the scenes, Piper and Adonis were close friends and in later years, Piper would claim to have seen Adonis’ ghost. 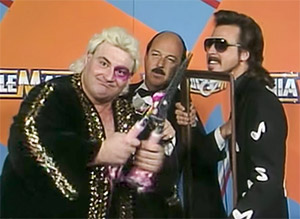 Adonis interviewed at the Pontiac Silverdome before his big match with Piper at WrestleMania III in front of 90,000+ fans. photo: wwe.com

The WWF had let him go shortly after WrestleMania III and Adonis’ return to the AWA was short lived.

On July 4, 1988, Adonis was traveling through Newfoundland, Canada with Canadian wrestling colleagues Dave McKigney, and identical twin brothers William and Victor Arko – known as the Kelly Twins (Pat and Mike Kelly) in wrestling circles. The four men were in a minivan when their vehicle drove off a bridge and into a shallow creek in Lewisporte, Newfoundland – a small coastal town with a population of roughly 3,000. William Arko was driving at the time of the incident, and was the only survivor. He suffered a broken leg and underwent surgery a few days after the accident.

One of the odd things about the minivan accident that claimed three wrestlers lives, including that of Adrian Adonis, is the lack of information, and conflicting reports.

Various reports stated that driver William Arko was blinded by the sun. Some reports also note that Arko may have swerved to avoid hitting a moose, while others say a moose was actually struck in the accident. An officer examines the scene of the van accident in Lewisporte, Newfoundland, which claimed Adrian Adonis and two of his colleagues. photo: youtube

Secret East raises another valid question, “Aside from the debated details of how the driver and sole survivor, William Arko, steered the minivan into the creek, there is yet another mystery surrounding the crash; the mystery of a detour that quickly landed the career of Adrian Adonis from New York’s Madison Square Garden to Newfoundland’s gymnasiums and hockey arenas within a single year.”

Adrian Adonis was seemingly on top of the world at his 1986 WrestleMania III appearance – performing in front of a packed 90,000+ Pontiac Silverdome. A little over a year later he perished in a cramped minivan, working to make ends meet on the indie circuit.

Adrian Adonis left behind his wife, Bea Franke, and two daughters. The family was residing in Bakersfield, California at the time of the accident.

Adonis is buried at Greenlawn Memorial Park in Bakersfield, California. 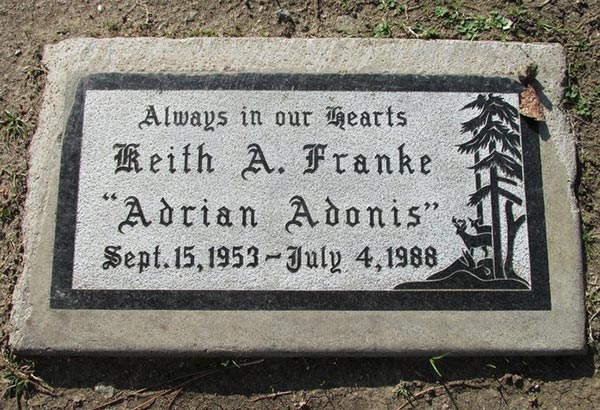