It was learned back in September that the Quebec-native was on hospice care after being diagnosed with bladder cancer a year prior. According to Slam, Gagné, who was quickly approaching his 70s, chose not to aggressively fight his bout with cancer.

Frenchy Martin was a fixture in WWE programming throughout the late 80s, most notably managing Canadian strongman, Dino Bravo. Frenchy Martin would occasionally carry a sign to the ring that said “USA is Not Ok” – effectively getting over his heel status as the villainous foreigner. Frenchy Martin competed in Stampede Wrestling, but was perhaps best known as the manager of the late Dino Bravo. photo: wwe.com

Prior to his run as a manager with the WWE, Jean Gagné spent time in Puerto Rico, and also saw success as a wrestler with Stampede out of Calgary.

In Stampede, Jean Gagné worked under the moniker “Don Gagné” and claimed Tag Team Championship gold in 1986, followed by the North American Heavyweight Championship in 1977.

Before transitioning to his most recognized role as a manager for Dino Bravo, Gagné was used as enhancement talent by the WWE.

While his run with the WWE may be considered brief, it should be noted that Gagné made appearances at all of the “big 4” pay per views throughout the late 80s, including WrestleMania IV, SummerSlam ’88, the ’88 Survivor Series, and the 1989 Royal Rumble.

On Episode 94 (March 30, 2018) of Bruce Prichard’s Something to Wrestle podcast, Prichard spoke highly of Frenchy Martin, noting “he drew some money in Puerto Rico and was a hell of a hand.” Chuckling, Prichard also credits Frenchy with teaching him how to smoke weed on a commercial airplane. “Great guy, a lot of fun.” WWE has put forth the following statement on Jean Gagné’s passing:

WWE is saddened to learn that Jean Gagné, known to WWE fans as Frenchy Martin, has passed away.

Though he began his WWE career as a competitor, Martin is best remembered for his time as the manager of the mighty Dino Bravo. Donning a brash monocle and a sequined beret, Martin helped his fellow French Canadian find success in 1987, while enraging American fans by carrying around a sign that read “USA Is Not OK.” Martin’s ringside antics made him a memorable face of WWE in the late ’80s despite a relatively brief run.

WWE extends its condolences to Gagné’s family, friends and fans. 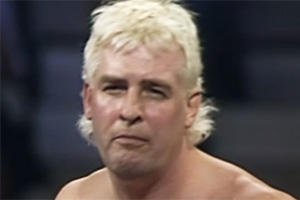