Mario Pérez Jiménez, who worked as Espectrito in Mexico and Mini Vader and El Torito with the WWF, has died at age 49. photo: wwe.com

A cause of death has not been disclosed.

Prior to landing in the WWF in the late 90s, Jiménez wrestled as Espectrito, spanish for “Little Ghost”.

Espectrito saw success in Mexico, working the mini division (referred to as “Mini-Estrella”). He had a run in the EMLL promotion, before moving over to the newly formed AAA (Asistencia Asesoría y Administración). AAA was run by Antonio Peña, a former CMLL booker, and the same man responsible for creating the mini division in CMLL. 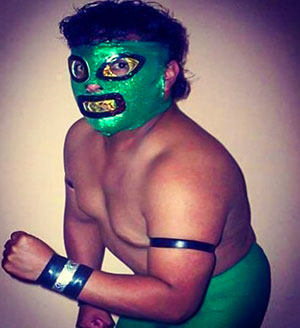 Espectrito would become the first ever Mexican National Mini-Estrella Champion for AAA, defeating Mascarita Sagrada in 1995.

Similar to how the WWF brought in Smoky Mountain talent in ’93 for cross promotion, the WWF struck a similar deal with AAA in 1997.

Espectrito benefited from the deal, receiving plenty of TV time with the WWF throughout the late 90s. His first gimmick was “Mini Vader”.

In ’97 the WWF repackaged their mini division – Jiménez worked under the moniker “El Torito”. 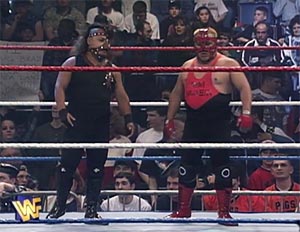 Mario Jiménez (right) with his brother Alejandro (left), working as Mini Mankind and Mini Vader with the WWF (1997). photo: wwe.com

El Torito made an appearance at the ’98 Royal Rumble, teaming with Battalion and Tarantula in a losing effort to baby faced Max Mini, Mini Nova, and Moasic. From 2013-2016, Mascarita Dorada worked under the ring name of El Torito for the WWE, though he wasn’t portraying the same character as Mario Jiménez.

Like Mario, the two worked the mini division in the 90s. Alejandro even spent time in the WWF with Mario during the AAA cross promotion (working as Mini Mankind and Tarantula). In Mexico Alejandro worked as Espectrito II. Alberto Jiménez worked as the original La Parkita in Mexico. 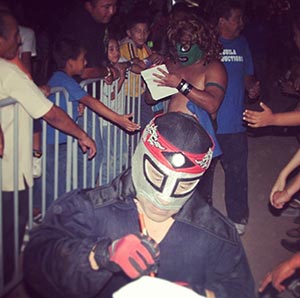 On June 29, 2009, both of Mario’s brothers were found dead in a hotel room in Mexico City. The brothers had met up with two prostitutes who took them back to their hotel room. While drinking in the hotel, the women spiked the brothers drinks, intending to knock them out and presumably rob them. Sadly, the pair died – likely because the women didn’t take into account their small stature when spiking the drinks. The women were eventually caught and in July 2010 they received 47 year prison sentences.

Many who knew Mario said that he was never the same after the sudden death of his brothers.

On January 23, 2016, Mario Jiménez died. He was 49 years old. Details surrounding his death were not made public.

Sadly, Jiménez joins a long list of other professional wrestlers who have died before age 50.

Our condolences to the Jiménez family.