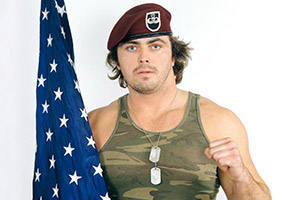 Michael James Penzel, best known as “Corporal Kirchner” in the WWF, dead at 64 from a heart attack.

Pro wrestling fans have seen wrestlers change their gimmicks to find renewed success but rarely have they seen such a radical transformation as the one made by Michael James Penzel.

Penzel would undergo a monstrous metamorphosis from the patriotic babyface Corporal Kircher to the horror-film inspired monster Leatherface.

Penzel worked in the WWE during the height of the Rock-n-Wrestling Era then would find success in Japan as a hardcore wrestler based on the villain from the film The Texas Chainsaw Massacre.

Penzel served in the United States Army as a paratrooper for the prestigious 82nd Airborne Division. According to his obituary at WWE.com, Penzel met Hulk Hogan at a gym, an encounter which led to Penzel venturing into wrestling.

Penzel trained as a wrestler under American Wrestling Association (AWA) owner Verne Gagne. From there, he spent time in the World Wrestling Federation as enhancement talent, but a major talent departure would open the door for a big break.

In 1984, Sgt. Slaughter was one of the hottest babyface acts in the WWF, having turned from a much-hated heel Marine drill instructor character to a patriotic babyface who clashed with the villainous Iranian wrestler, the Iron Sheik. However, a conflict with WWF kingpin Vince McMahon led to Slaughter’s exit from the company, leaving McMahon with a gap to fill.

Slaughter’s departure became Penzel’s jump from the preliminary matches. Wrestling lore has it that McMahon learned of Penzel’s legitimate background in the 82nd Airborne and decided to transform him into Corporal Kirchner, the WWF’s new patriot.

Unlike some wrestlers who falsely boasted of a military background, Kirchner’s time in the Army was as real as it gets.

Kirchner debuted on WWF TV in the summer of 1985. The camouflage-clad competitor was booked into programs against the WWF’s foreign heels including the Iron Sheik and Nikolai Volkoff.

Kirchner also competed in the 1985 Wrestling Classic, falling in the first round against “Adorable” Adrian Adonis.

The WWF gave him a significant win at WrestleMania II when he defeated Nikolai Volkoff in a Flag Match. Perhaps the most interesting part of this match was the build-up, which saw reality and kayfabe blurred when Kirchner appeared on heel wrestler Jesse “The Body” Ventura’s talk segment, “The Body Shop.” In the segment, Kirchner acknowledged Ventura’s time as a Navy Seal and shook “The Body’s” hand.

Kirchner continued playing the role of the WWF’s resident patriot, but he failed to get over as much as Sgt. Slaughter did with fans. As 1986 continued, Kirchner began putting more opponents over, effectively becoming a jobber to the stars. Nevertheless, he was immortalized with an LJN action figure.

The WWF suspended Kirchner in 1987 for alleged drug use. Drug abuse was rampant in wrestling at the time and some fans have speculated what it would take for a wrestler to get suspended for drug use in this era of excess. Corporal Kircher chose to leave the WWF after his suspension finished. From there, he worked in Stampede Wrestling, New Japan Pro Wrestling, and Herb Abrams’ Universal Wrestling Federation.

In 1992, Penzel made one of wrestling’s most radical transformations, changing his wrestling persona from Corporal Kirchner to the masked Leatherface, an homage to The Texas Chainsaw Massacre’s villain.

Leatherface terrified fans with his entrance, which featured him wielding a chainsaw, a bloody butcher’s apron, and a horrific mask. Leatherface competed in Japan’s W*NG promotion but saw his push stalled when he was jailed after an altercation in a Japanese bar. A Where Are They Now? feature on Kirchner from 2007 detailed what happened:

One night, while out with pals in the popular nightlife district of Japan known as Roppongi, he got into an altercation with a Japanese man who was harassing one of his friends. After words were exchanged, the 250-pound Kirchner smashed the guy in the jaw and literally broke his face. Although he insists the punch was thrown in self-defense, the competitor was still sentenced to four months in prison.

In 2004, Kirchner decided to retire from wrestling full-time, switching gears to a job as a truck driver.

Penzel worked his last match in 2010.

In 2006, fans were shocked when the WWE reported that Corporal Kirchner had died. Oddly, the WWE’s reporter confused Kirchner’s identity with someone else who had died. The confusion was cleared up and the WWE corrected the report, leading to Penzel’s surprise that fans even remembered him.

On December 22, 2021, Michael Penzel passed away in his home in Siler City, North Carolina after suffering a heart attack. He was 64. Penzel was survived by:

On December 23, 2021, the WWE released the following statement:

We are saddened to learn that Michael Penzel, better known as Corporal Kirchner and beloved by fans all over the world, passed away yesterday at the age of 64. Our sincerest thoughts are with his family, friends and those affected by his passing.

Sadly, many other wrestlers have died from heart attacks, heart failure, and heart disease.

What are your favorite memories of Corporal Kirchner?