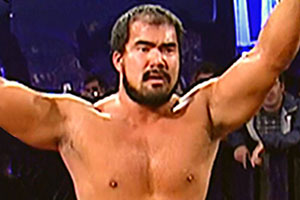 Ryan Sakoda was a wrestler better known for his days in smaller promotions, but also spent time working in the WWE in 2003 and 2004 as part of a developmental contract.

From there, Sakoda worked in Ultimate Pro Wrestling as well as Zero-One. Ryan formed a tag team with Samoa Joe in Zero-One, capturing the NWA Intercontinental Tag Team Championship.

Sakoda’s talents caught the attention of the WWE, which signed him to a developmental deal in 2003.

Sakoda teamed with Jimmy Wang Yang and served as a henchman for Tajiri. However, Sakoda was released in 2004.

From there, he competed in the short-lived Wrestling Society X before retiring in 2007.

After hanging up the boots, Sakoda went to work for Disney at their Grand California Hotel.

Like many former WWE Superstars, Ryan Sakoda participated in the class action lawsuit filed against the WWE that alleged wrestlers suffered traumatic brain injuries during their WWE careers that the company knowingly hid the long-term effects of concussions. In 2021, the lawsuit was dismissed and the United States Supreme Court refused to hear an appeal, ending the case.

Sakoda died on September 2, 2021 at age 48. The cause of death remains unknown as of this writing.

Other professional wrestlers to pass in 2021 include Bobby Eaton, Butch Reed, New Jack, Paul Orndorff, and The Patriot.

What are your favorite memories of Ryan Sakoda? Let us know in the comments below.