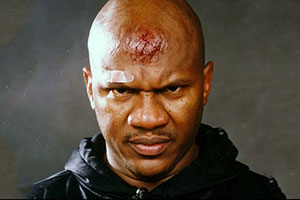 ECW alum New Jack has died of a heart attack. He was 58.

VICE TV’s Dark Side of the Ring covers the controversial and often seedy side of wrestling and Jerome “New Jack” Young’s life and career was custom-made for the show. However, who was New Jack and did he deserve his controversial reputation?

New Jack was known for his brutal style in the ring and his take-no-prisoners attitude that saw him involved in several criminal cases due to his vicious style.

New Jack’s role in the infamous Mass Transit incident would forever tarnish his legacy. In November of ’96, Jack brutalized would-be wrestler Erich Kulas at an ECW house show. The incident left the underage teen hospitalized. New Jack was charged with assault and battery, and while he was acquitted, the incident led to the cancellation of ECW’s first pay-per-view, Barely Legal.

In later interviews, Young would recall living a violent life including watching his father stab his mother. Young crafted a mystique about himself that no one has ever pierced, including claims that he was a bounty hunter at one point in his life and that he had committed two justifiable homicides.

Whether these claims were fabrications or fact, New Jack’s wrestling career makes it easy to give even a skeptic pause.

While New Jack’s pre-wrestling life is an enigma, it is known that veteran grappler Ray Candy (best known for being in the team The Zambuie Express) trained him.

It would be in Smokey Mountain Wrestling where Jack began to create a buzz. Teaming up with Mustafa Saed, the duo formed a tag team known as the Gangstas. The Gangastas were the perfect heat-magnets to terrorize the babyfaces of Jim Cornette’s territory.

Jack knew how to inflame the largely Southern audience with his racially-charged promos and before long, the Gangstas were one of wrestling’s most talked-about teams.

Jack’s incendiary comments can be seen with the following promo he cut in Smokey Mountain during the OJ Simpson trial, “I’d like to send a special shout-out to my homeboy O.J. Simpson. Keep up the good work baby, two less we got to worry about.”

New Jack and Mustafa Saed moved to Extreme Championship Wrestling, joining the hardcore promotion in the summer of 1995.

While in ECW, the Gangstas took part in some of the promotion’s most physically intense feuds including storylines with Public Enemy and the Eliminators.

Despite a willingness to risk his body to entertain the fans, Jack’s ease of intentionally hurting opponents who crossed him made for a controversial legacy.

Take former ECW wrestler Vic Grimes, who New Jack blamed for a serious injury at 2000’s appropriately-titled Living Dangerously pay-per-view. New Jack blasted Grimes for his sloppiness as well as for failing to check on him after his injury. Consequently, Jack admits he tried to kill Grimes in a scaffold match at XPW’s 2002 Freefall. Fortunately, New Jack failed, but not from a lack of trying:

In 2003, New Jack’s indifference to his opponents’ safety was seen when he battled 69-year-old wrestler Gypsy Joe. According to New Jack, he pummeled the geriatric grappler with various implements of destruction after Gypsy Joe no-sold Jack’s offense.

Just a year later, New Jack found himself racking up more felonies when he stabbed wrestler William Jason Lane at an indie show after Lane purportedly potatoed him. During his Dark Side of the Ring appearance, New Jack stated he shanked Lane 16 times.

While New Jack’s bloody reputation ensured he would never find work in the big leagues of WCW or the WWF, he found fairly steady work on the independent scene. He also made a few appearances for TNA Wrestling throughout the 2000s.

New Jack continued wrestling, retiring at one point, but returning to a number of small promotions.

New Jack leaves a legacy of controversy that few figures in the industry have or will attain.

We send our best to the friends and family of Jerome “New Jack” Young.