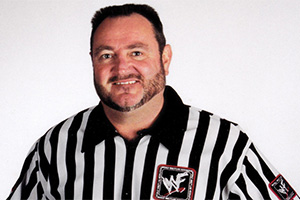 Tim White had one of the most interesting starts in professional wrestling, working as the handler for Andre the Giant before stepping into the ring as a referee.

After an in-ring injury ended his refereeing run, White was involved in one of the wildest storylines in wrestling—a series of vignettes where he tried to kill himself.

Born Timothy White on March 25, 1954, White would enter the wrestling world in the 1980s, a journey that would take him around the world and endear him to many wrestlers and figures in the industry.

Traveling the Globe with “The Eighth Wonder of the World”

White started his WWF career as Andre the Giant’s handler. White had to make sure Andre made his appearances and given Andre’s incredible height and weight, he had his hands full making sure Andre had adequate transportation and lodgings while he toured around the world. Tim White was not only a WWE referee, but was also known for his behind the scene’s role as Andre the Giant’s handler

Andre’s travel companion also worked part-time as a referee. White became friends with Andre and their globe-trotting would provide many lasting memories.

The part-time referee became a full-time referee following Andre the Giant’s death in 1993, officiating some of the WWE’s biggest bouts including 1998’s Hell in a Cell Match between The Undertaker and Mankind.

Suicide is Not Painless

While White no longer officiated, he continued appearing in the WWE including one of its most odd storylines. In 2005, the WWE began airing vignettes where a despondent White confided to WWE correspondent Josh Matthews that he was a broken man, both physically and mentally after being forced to retire as a referee.

This led to various segments on the WWE’s website where White attempted to end his life. The segments (which became known as The Lunchtime Suicide Series) were panned by fans and critics as tasteless but these complaints seemed to do little to stop them from airing.

The WWE released White in 2009, the end of a 24-year run with the wrestling promotion. White stayed in the business however, providing security for wrestlers during autograph signings. Not much is known about Tim White’s death at this point other than he died on June 19, 2022, at age 68.  Ten-Bell Salute will provide additional details as they become known.

Time White’s Death Leads to an Outpouring of Online Tributes

White’s death shocked the wrestling world as many tributes began pouring in online, spanning the various eras of wrestling and showing how loved he was:

Very saddened to hear of the passing of Tim White. I always looked forward to seeing Tim. Last time was around Christmas. As always, Tim as warm, genuine, and full of life as usual. I’ll miss hearing your stories. See ya down the road.

What the hell man Tim White was one of the realest. We spent so much time together as Andre and I already Rode together and he was Andres right hand. Really tough to see this #riptimwhite

I’m Saddened To Hear About The Passing Of Two Of My Friends- Dave Hebner & Tim White. I’m Grateful To Have Known Both Of These Incredible Men. Rest In Peace! 🙏🏻🙏🏻🙏🏻

Saddened to hear about both Dave Hebner and Tim White. Both incredible men I was privileged to spend time with in and out of the ring. My thoughts are with their families.

I lit up every time I saw this man! Tim White often was the man tasked with shepherding us at appearances and conventions the last several years. He was always extraordinarily kind and warm. I will miss you, my friend. My deepest condolences to his family and friends.

Others from the pro wrestling world who passed in 2022 include Scott Hall and referee Dave Hebner.

Although referees aren’t at the forefront of the action, Tim White managed to have some memorable moments. What are your favorite memories of this referee? Let us know in the comments below.