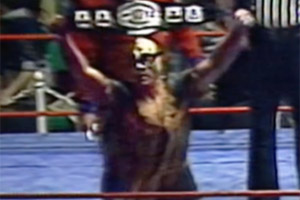 Luchadores seem to start their careers at a young age, and such was the case of El Solitario, who entered the ring at the age of 14.

Born on May 22, 1946, Roberto González Cruz learned the basics of wrestling from his older brother Jesús. Sadly, Jesús died in the ring in 1959.

Roberto was 16 years old at the time of his brother’s passing, and determined to not only continue his brother’s legacy in the ring, but was also striving to carve out a successful identity on his own.

Roberto found success in 1966 when he adopted the identity of El Solitario, (aka “The Lonely One”), a variant of the Lone Ranger (aka “El Llanero Solitario”) an extremely popular TV and comic book character at the time.

Roberto González Cruz became a main eventer, holding the NWA World Light Heavyweight Championship, considered by many in Mexico to be the most prestigious belt at the time.

Considered to be on the same level of fame as Mil Mascaras and Ray Mendoza, his feud with arch-rival Dr. Wagner defined his career. Solitario worked as a rudo (aka heel) in Lucha Libre, teaming with Dr. Wagner and Angel Blanco until they betrayed him. Cruz turned technico (aka babyface) and feuded with his former teammates.

Roberto González Cruz’s fame led to tours in New Japan Pro Wrestling where he expanded his fan base. In 1985, Cruz triumphed over Dr. Wagner in a mask vs. mask match, unmasking the rudo.

Like many wrestlers, El Solitario dealt with nagging injuries throughout his career. These injuries would ultimately end up taking his life – at least according to wrestling lore. What’s been established is that after a match with Fishman on April 6, 1986, El Solitario required immediate surgery. Sources point to everything from knee surgery, to back surgery, to treating a “very strange illness”.

Nevertheless, most research shows that the injuries El Solitario sustained from the match against Fishman stemmed from previous injuries he had suffered throughout his career.

Things get even more convoluted from there, with wrestling lore pointing to doctors misdiagnosing an injury, and later realizing El Solitario was suffering from internal bleeding. Both cardiac arrest and a heart attack have been listed as the culprit’s for Solitario’s death. He was 39.

Sadly, like many other pro wrestlers, El Solitario died before age 50.

Oddly enough, Solitario’s older brother Jesús also died while wrestling. The only information we could source was that his brother died in 1959 and was wrestling under the name Othon Banzica.

Many other pro wrestlers died in the 1980s including Adrian Adonis, Bruiser Brody, Gino Hernandez, and David Von Erich.