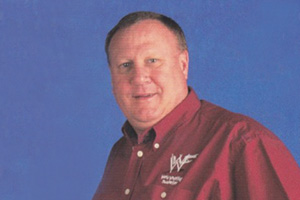 Is that the real Dave Hebner? Whether you watched it as it happened or saw it replayed on the WWE Network, the night when two versions of Dave Hebner appeared in a WWE ring is burnt into the collective consciousness of wrestling fans.

Hebner’s role in one of the greatest angles in wrestling was arguably his career highlight, but it was just one of many memorable moments for an official whose capacity is to be a background figure in the wild world of wrestling.

Dave and Earl Hebner were born on May 17, 1949. Like many people who broke into wrestling, they were fans growing up. Dave not only refereed but occasionally wrestled, donning a mask to hide his identity.

The Most-Watched Show in Wrestling

Referees are normally supposed to be background figures in wrestling but on February 5, 1988, Dave and Earl Hebner played a key part in the most-watched show in wrestling. That night, NBC aired The Main Event, the first prime-time airing of wrestling in decades and a show headlined by Hulk Hogan’s WWF Championship defense against Andre the Giant.

The match saw Andre pin Hogan after delivering two head butts but they weren’t enough to stop Hogan as he kicked out at the one-count. That didn’t stop referee Dave Hebner from making a three-count, awarding the title to Andre. Something phony was going on, but what?

The fans soon found out when a man who looked just like Dave Hebner showed up. Of course, it was actually the real Dave Hebner, who had been replaced by his evil twin, Earl. Earl had been hired by “Million Dollar Man” Ted DiBiase to ensure Andre won the belt. Like many things in wrestling, the WWF let time pass, with both referees working in the company as officials.

While Dave Hebner’s WWF career would see him return to less prominent roles as a character, he refereed a number of key matches during his career including Savage vs. Steamboat at WrestleMania III, Hogan vs. Savage at WrestleMania V, Hogan vs. The Ultimate Warrior at WrestleMania VI, and of course the aforementioned Andre vs Hogan match during The Main Event.

According to Dave, The Main Event match put a target on both he and his brother’s backs:

“It was a good match. We had to have police escorts to the airport, because people wanted to kill us. One of the biggest things ever in the wrestling world today. I don’t think anyone has ever topped that one.”

A knee injury forced Dave to retire but he continued working in the WWE until the company dismissed him and his brother in 2005, alleging they had sold WWE merchandise without the company’s permission. In a 2009 interview, Dave denied the claim:

“That’s a barefaced lie; I’ve never stole anything from Vince McMahon. As a matter of fact, I’ve saved him money; I’ve caught people stealing his money, Jack Tunney for one. I’ve never stolen anything; they just wanted us out of there.”

Nonetheless, both Hebners were gone from the WWE.

Life After the WWE

After his abrupt exit from the WWE, Dave appeared in TNA Wrestling where his nephew Brian refereed. Dave said he dealt with depression for several years as he tried to wrap his head around the WWE dismissing him for what he saw as a baseless reason.

The Death of Dave Hebner

On June 17, 2022, Dave Hebner’s nephew Brian tweeted the news that his uncle had passed. Earl later tweeted a touching tribute to his twin:

Yesterday I had to say my last goodbye to my other half, my partner in crime, my road buddy for years, my brother for 73 years.  I love you David, I’ll never count you out.

Dave Hebner is survived by his wife Rebecca, their two daughters Christina and Becky, and his twin brother Earl. Dave Hebner was 73.

Others in the wrestling world who passed in 2022 include Scott Hall and referee Tim White.