In the 80s and 90s, Kamala feuded with greats including Andre the Giant, Hulk Hogan, and The Undertaker. Today his money is wiped out and he’s had both legs amputated. photo: wwe.com

James “Jim” Harris is a retired professional wrestler. He is best known by the ring name Kamala. Born in Senatobia, Mississippi on May 28, 1950, he grew up in Coldwater, Mississippi.

Harris had a difficult childhood. His family originally owned a furniture store, which failed after his father was shot and killed during a dice game. Jim, his mother and four sisters were left poor and on welfare. He worked the fields as a sharecropper, along with his mother. By his teens he was a burglar, and was warned to leave town by the police. Harris briefly picked fruit in Florida and drove a truck before getting into wrestling at age 25. 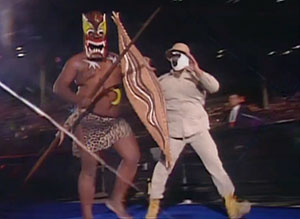 Kamala was billed as the “Ugandan Giant”. Here he’s escorted to the ring by manager, “The Wizard”. photo: wwe.com

Jim Harris was living in Michigan when he met wrestler Bobo Brazil. Brazil introduced him to “Tiny” Hampton, who trained him. Harris went by the ring name of “Sugar Bear Harris” and had a low-level wrestling career in the 1970’s. At first his wrestling persona was a mild, likable one. That changed when he adopted the persona of Kamala with the help of Jerry Lawler and Jerry Jarrett. They believed that portraying an African wrestler and using a “wild savage” gimmick would advance his career.

Their instincts proved sound. Kamala had a long career using that persona, dubbed “The Ugandan Giant”. From 1984 through 1993 he wrestled with the World Wrestling Federation and the United States Wrestling Association. Kamala and Andre the Giant had a notable feud. Hulk Hogan and the Undertaker were other high profile opponents during Kamala’s run with the WWF. 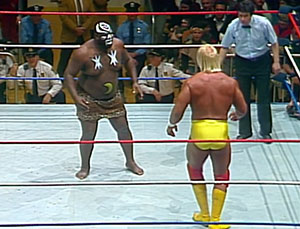 While wrestling with the United States Wrestling Association Kamal feuded with Jerry Lawler. He was also a four time winner of the USWA Unified World Heavyweight Championship.

Kamala left the WWF for a second time in 1993 after missing scheduled appearances in both the 1993 Royal Rumble and WrestleMania IX. There followed two lean years when he returned to driving a truck to make a living. Kamala hits the Undertaker with a splash. SummerSlam 1992. photo: wwe.com

Hulk Hogan brought Kamala back into wresting in 1995 when he advised Kamala to join World Championship Wrestling (WCW). He was dropped from the WCW within a year of joining. Failing health ultimately led to Kamala’s retirement.

The rough time that Jim Harris had in his childhood proved to continue into his adult life. His sister and niece were murdered. He has been married twice. Kamala had a difficult time in the later part of his wrestling career and he never made the kind of money that some other big name wrestlers, such as Hulk Hogan, managed to make during their careers. This became apparent when his health declined and he retired. Sadly, Harris’ health has declined as much as his finances. Always a big guy, he gained weight. He was diagnosed with diabetes in 1992 and the effects of the disease have rapidly progressed since his retirement. On November 7, 2011, diabetes and high blood pressure forced the amputation of the former wrestler’s left leg. In April 2012 his right leg was amputated. Kidney failure has forced him to rely on dialysis.

Harris now lives in rural Mississippi where he relies on disability and building wooden chairs to survive. He maintains communication with his fans on his Facebook page. 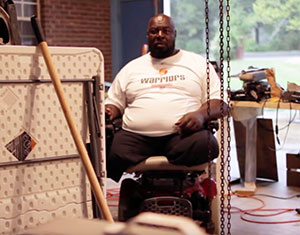 Fortunately, Harris has built up goodwill in the wrestling community and online. Former wrestler Ted DiBiase told the Bleacher Report, “Sometimes, the guys that look the meanest in the ring are actually nicer than anyone outside of it. That was the case with Kamala. He didn’t have a mean bone in his body.” In 2014, a GoFundMe campaign raised over $40,000 for Kamala’s medical bills.

For an excellent mini-documentary on Kamala (courtesy of the Bleacher Report), check out the video below:

Have something to say about Kamala’s wrestling career or his post-wrestling struggles? Leave a comment below